The Critical Theory Research Workshop is an interdisciplinary forum beyond the classroom for undergraduate students to share and develop their interests in critical theory. The group aims to develop more robust relations between undergraduate and graduate students interested in critical theory. The Critical Theory Workshop meets to discuss works of philosophy, literature, feminism, queer theory, Black thought, and anything else relevant to those thinkers and activists past and present who have sought to critique unjust structures of power (as well as eat pizza). We seek to integrate more closely the praxis of critical theory, discussing direct action and hosting activists and those in the fight against injustice. It is open to graduates (who typically lead discussions) and undergraduates of any field.

The Critical Theory Research Workshop's funding is the product of an initiative from three undergraduates, Rafael Vizcaino, Annabel We, and Joyce Fan who successfully sought funding from the Kaplan Institute in 2012/2013, with co-sponsorship from French, German, and Comparative Literary Studies.  Graduate students sign up to lead bi-weekly sessions. Previous authors have included Butler, Deleuze, Fraser, Bataille, Derrida, Benjamin, Rorty, Arendt, Adorno and Horkheimer, and many more. In 2013, the workshop also hosted an invited end of year visiting speaker, with an associated workshop and dinner for those who participated through the year.

Invention and Errantry in Education: Rodríguez/Kohan, Rancière, and Hostos | A Graduate-Undergraduate Cross-Over Event 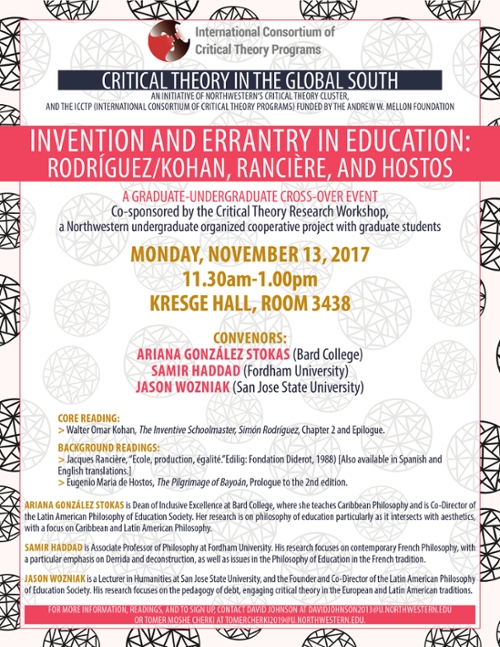